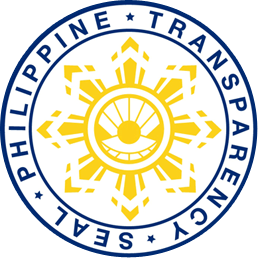 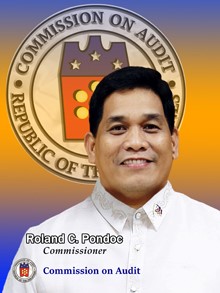 Commissioner Roland Café Pondoc was nominated to the Commission on Audit (COA) by President Rodrigo Roa Duterte on February 6, 2018 and was confirmed unanimously by the    Commission on Appointments on March 14, 2018, for a term of seven (7) years expiring on February 2, 2025.  A Certified Public Accountant (CPA) and a Lawyer, Commissioner Pondoc    concentrated his love for education with his Alma Mater, the University of Mindanao (UM) - Davao City, for 22 years, while practicing both of his professions.

He served as a professor in the Colleges of Accountancy, Law, Business Administration, Criminology and the Graduate Studies of the said institution from 1994 to 2016.  He was an    Assistant  Dean of the College of Law and also served as Director of the Office of the Student Affairs.  Commissioner Pondoc’s exceptional work as an educator was recognized by his    Alma Mater which  awarded him the Outstanding Employee Award in 2002, Outstanding Professor Award in 2005 and Golden Harvest Awards for his outstanding achievements as    Professor  in the years 2008,  2009 and 2010. As Commissioner of COA, he was bestowed with the Institutional Award in 2018, the highest and most prestigious award given to outstanding  Alumni by the said University for  his exemplary track record.

While in the academe, he also served his co-employees being the President of the UM Employees Cooperative for six consecutive years from 2005 until 2010, and he is still active today in    the Cooperative movement as member of various cooperative organizations.

He was also a National Awardee as an Outstanding Business Educator in the Field of Accountancy in the years 2004 and 2011 conferred by the Philippine Council of Deans and Educators    in Business (PCDEB), and by the Petron Foundation. In 2020, he was a recipient of Signum Meriti Award, the highest institutional citation of honor conferred by the Saint Paul School of    Professional Studies (SPSPS) of Palo, Leyte, for his outstanding performance in the fields of Accountancy and Legal Education, and in the Government Service.

Before concentrating in the academe, he worked for private companies from 1988-1995: as Accountant of the Tri-Star Corporation, as Special Assistant to the Vice President of Eden Corporation, and also as Data Controller of Jesus V. Ayala Management Corporation, right after his graduation at the age of 19.

After he decided to leave his full-time work in the academe, he diverted his concentration to public service.  Commissioner Pondoc joined the government service in 2014 as full-time Legal Officer of the Southern Philippines Medical Center (SPMC) in Davao City, where he also provided free legal services to indigent patients of the said largest, if not, the biggest government hospital in our country today.

Prior to his nomination, Commissioner Pondoc was appointed as the Assistant Executive Secretary in the Office of the President on September 1, 2016, and specifically assigned as the Assistant Deputy Director General for the Administration, Logistics and Finance of the Association of Southeast Asian Nations (ASEAN) 2017 National Organizing Council for the entire period of the Philippine Hosting of the ASEAN 2017 Summits and Related Meetings.  He was directly in-charge of the logistic requirements of all conducted meetings regardless of its location in the country and the number of foreign and local delegates involved.  He was also in charge of carefully and critically monitoring the proper utilization of the budget intended for the said events.  And as a result of his dedication and contributions toward the successful Philippine Hosting of ASEAN 2017, he was recognized in 2018 as recipient of the Presidential Citation conferred by no less than President Duterte himself in Malacañan Palace.

He is a Reservist of the Philippine Air Force with the rank of Lieutenant Colonel, and also a Licensed Real Estate Appraiser, a Licensed Real Estate Broker, as well as a member of the ASEAN Chartered Professional Accountants (ACPA). He maintained his being an Accredited External Auditor by the Board of Accountancy (BOA), and while he was in the public practice he was an Accredited Tax Practitioner by the Bureau of Internal Revenue (BIR) and an Accredited External Auditor for Cooperatives by the Cooperative Development Authority (CDA). Presently, he is the Chairperson of the Gender and Development Focal Point System of COA and one of the prime movers of the Integrity Management Program in the Commission on Audit.

Commissioner Pondoc is married to his beautiful wife, Gilen Noval, and they are blessed with two sons, namely, Ralph Albert and Roice William.